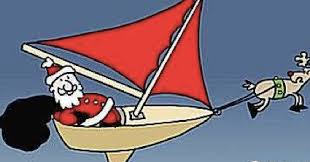 This Vendée Globe will be Alex Thomson’s fifth participation. Given his track record and the means implemented, he is bound to be among the favourites for the planetary crown. Always in the forefront, the British sailor has designed a totally revolutionary boat whose aesthetic lines contrast highly with anything seen before: a fully closed cockpit, a short deck plan, oversized curved foils, and many other innovations which haven’t all been revealed. The Vendée Globe has progressively become the Holy Grail for this Briton. If he reached his objective, he would thus be the first foreigner to establish himself in this race - a preserve of French sailors as of yet

Unfortunately by the time we have printed this Hugo Boss and Alex Thomson has had to retire due to hitting a unidentfied object damaging his rudder. He is now safely moored in Cape Town.
A Good Read..... Longitude
The True Story of a Lone Genius Who Solved the Greatest Scientific Problem of His Time
​ is a best selling book by Dave Sobel 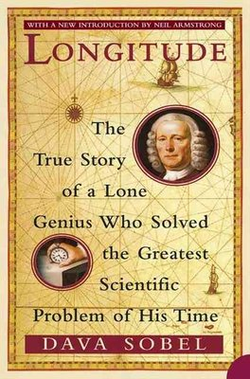 ​John Harrison, an 18th-century clockmaker who created the first clock (chronometer) sufficiently accurate to be used to determine longitude at sea—an important development in navigation.

'Longitude' is a book that's worth reading and re-reading to learn how ideas can be turned into fact. Ultimately, it also proves the point that 'Genius (or success - my addition) is one per cent inspiration and ninety-nine per cent perspiration' - as Edison told us not so long ago.

N.B.
There are other suppliers out there if you don’t want to use Amazon…... Wordery.com has free delivery and comparable prices or World of books...used...also free delivery
AKH
Ro-Ro article by RJS

​​Just as the "container revolution" was getting under way in the mid-'60s, "roll-on, roll-off" cargo ships started to dominate the Channel, North Sea and Irish Sea freight trades.

Ignoring ramped craft built for river and other sheltered crossings, the story of the "drive-on, drive-off" ferry began in 1928, when the Southern Railway commissioned Wootton to serve the Isle of Wight. Also in 1928, Townsend Ferries (later part of Townsend Thoresen) commissioned the converted minesweeper Forde as a cross-Channel car carrier.

But it wouldn't be until after the War that the concept of the "roll-on, roll-off" pure freight ferry arrived on the shipping scene. The key innovator was Col. Frank Bustard's Atlantic Steam Navigation Co., which pioneered use of converted World War 2 tank landing ships (LSTs) in commercial freight services.

With an initial fleet of three leased vessels- later much expanded- what was to become known as the Transport Ferry Service (TFS) began operations on routes from Tilbury - Hamburg (later Antwerp) in 1946 and from Preston to Larne two years later.

The Port of London Authority adapted 26 berth in Tilbury Docks and enjoyed much useful publicity over the following years from the interesting and unusual loads moved on TFS sailings.

The operation was acquired by the British Transport Commission in 1954, coincident with the company's thoughts turning to a new generation of purpose-built ships.

Britain's first commercial ro-ro freighter was the 1,200 dwt. Bardic Ferry built for TFS in 1957 by the Dumbarton, Clyde yard of William Denny, which launched her sister ship Ionic Ferry the following year. They established the ro-ro freighter's signature layout of bridge and accommodation well forward, with a flat run aft to the stern door.

The final and largest version of the Bardic Ferry design was the elegant Europic Ferry, 2,740 dwt., also built by Swan Hunter and delivered for North Sea service in 1967.

To benefit from much shorter crossing times, TFS' Continental services had switched from Tilbury to by now fast-growing Felixstowe in 1965, with Europic Ferry inaugurating a fast new Felixstowe - Rotterdam (Euro port) service in 1968. It was TFS that truly laid the foundations for Felixstowe's dramatic expansion as a container and ferry port. The TFS fleet was acquired by the European Ferries Group (EFG) in 1971 and switched to EFG's distinctive Townsend Thoresen red livery. In turn, EFG was acquired by P&O in 1987, bringing a final livery change to the former TFS ships.

With the exception of Gaelic Ferry - and in common with many other British ferries of their era - the other five TFS ships all finished their careers in the Med., the ex-Europic Ferry soldiering on for a total of 37 years, until scrapped as recently as 2005.

Large Ro-Ro ships and ro-ro/container "hybrids" figured in a number of deep-sea trades. Early examples on the North Atlantic (1969/70) were the ships of Moore-McCormack, Finn lines and, most notably and successfully, the Atlantic Container Line (ACL) consortia.

ACL's second Atlantic Conveyor (built for partner Cunard in 1970) became the largest casualty of the Falklands campaign in 1982, hit by two Exocet missiles on the same day that the destroyer HMS Coventry was bombed and sunk.Atlantic Conveyor foundered under tow two days later- the nine Wessex and Chinook helicopters in her cargo being much missed in the advance overland to Port Stanley.
Europic                                                                                      Bardic
​Scandinavian operators were big fans of large ro-ro in the '70s, though many of them ultimately passed into the logistics fleet supporting global operations by the US military. But they and that are another story.
Towing Bridle & Line for use with Rigiflex rescue boat
​A recent experience when attending a capsize, whilst on safety boat duty, brought to light the difficulty in attaching a tow line to the Rigiflex.
As a result I have made up a “Towing bridle” and tow line. I hope it will make the towing operation safe and relatively easy. 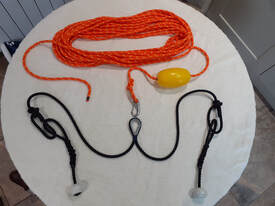 The bridle is made up of three parts (refer to Photograph) which are:-

The tow line is 20m of 8mm 8 plait high viz. floating multi strand polypropylene (770 kg load) rope which is easy to coil and cast over to the towed boat. One end is fitted with a “snap tackle” type hook for quick and secure attachment to the bridle hard eye. A “float” is included to provide buoyancy at the hook end.

It is intended that the bridle be rigged and left attached to the transom – its length is such that it will pass over the top of the OB motor and, when not in use, will be stowed within the boat.  When deployed the tow line (stowed in the front locker) is hooked onto the bridle and both are passed over the OB into the towing position the free end then being cast over to the towed boat. On board the towed boat a couple of turns of line are taken around the mast at foredeck level but importantly, not made fast  - the remaining free end being held by a person on board who keeps enough tension on it to cause the tow line to tighten around the mast base and pull the boat along. The pull force is easily released by letting the free end run – for instance when about to come alongside the jetty.

We propose to demonstrate the method using one of the club boats and hold a number of practice sessions for members.
BWH